Last week, I said goodbye to something I loved: my 2001 Aprillia Scarabeo scooter. I bought it about six years and 10,000 miles ago. I have had many adventures on it. It brought me to work and home each day, it took me to Fort Bragg on a somewhat absurd solo adventure, and it survived a couple of vandalism episodes: one, ruining the ignition, one ruining the trunk lock. Year after year, it was my stalwart riding companion.

Until last December. One weekday morning, I came outside to discover it was gone. By the time the police recovered it, four days later, it had cracks in every body panel, the thief had tampered with the wiring, and one turning signal was smashed, dangling from a couple of wires.

An insurance adjuster came to review to damage and he declared it a “total loss.” This means that though it still ran beautifully (and would cheerfully start for anyone who pushed the button on the hotwired motor), insurance wouldn’t pay me anything to repair it. Rather, I was offered a generous check and that afternoon, a truck pulled up to take the scooter away for salvage. 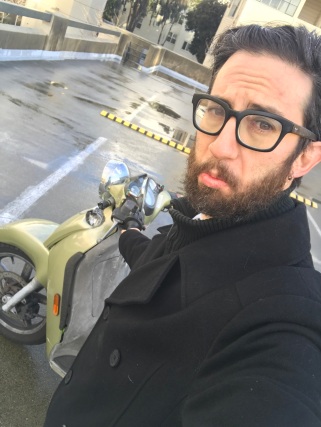 This was in the middle of a busy day at work. I suppose the rational thing would have been to leave the scooter with the man to load on his truck. I could’ve gone inside, gone about my day, moved on. But that’s not what I did. Instead, I stood on the sidewalk and watched the man winch my scooter down with cables, secure the cracked panels with duct tape, and run metal hooks through the spokes of the wheels. Then I stood there as it started to rain, I waited while he climbed in the driver’s seat and made twenty minutes of phone calls. I continued to stand there as he started the diesel engine and drove two long city blocks.

I watched my scooter, green-grey, the color of wasabi, rolling away from me, down the street on the back of a truck — turn the corner, and disappear forever.

Once inside, the school security guards had a field day with me. They’d watched the whole thing on camera. And I’m sure to the outside observer, it looked ridiculous. Standing in the rain for twenty minutes, just to see my scooter go?

We had a good laugh, I didn’t mind – but what they didn’t know is that I have a particular history with this sort of thing.

Maggie was the dog I grew up with, a collie – very gentle, not very smart, barked a lot. The summer after my junior year of college, it was time to put Maggie to sleep. She was having trouble doing basically everything a dog is supposed to do: seeing, walking, eating, none of her basic doggie functions were functioning any longer, and my mother, who loves her pets deeply, loaded Maggie in the back of the mini-van and off we went to the vet.

Once inside, my mother was overcome with grief and I volunteered to bring Maggie behind the closed door to the room she would enter but never leave. My mother got down low, hugged and kissed Maggie goodbye, and I lead the dog away to a room where the vet and I lifted her frail frame onto a stainless steel table.

The vet prepared his syringe, and rather than turn away, I laid my hands on Maggie. I imagined her soul, her little doggie soul, prying loose from her mortal coil, floating up to heaven. It wasn’t a totally smooth process. Her muscles convulsed and she shivered and the vet started telling me in a stern voice not to worry – but I blocked him out. I laid my hands on her. I felt her. I concentrated. I imagined it to be my responsibility to be her boatman, ferrying her across the turbulent river into gentle darkness. A very long ten seconds passed and she was still.

Having a little trouble saying goodbye to my beloved, beat-up sofa.

I have not always been so courageous with my goodbyes. I regret each failed opportunity to be present for transformation.

On the day that 1-800-GOT-JUNK came to haul away my beloved, beat-up sofa, my napping spot since I was a child, gifted to me by my parents and a key fixture in every apartment I’ve lived in my adult life, I made sure I was at work. I came home and it was gone.

On the day my dear friend and roommate loaded his U-Haul to move to New York, I was hiding in a Boston cafe with my laptop. When I came home, he was gone.

And about seven years ago, on the last day of my relationship with a woman I was engaged to, after we called it quits and decided to go separate ways, the day she moved her stuff to a friend’s house down the street, I arranged to be in Tuscon for the weekend. When I came home, she was gone.

I’ll admit, the sofa incident is probably a case of too-much-sentimentality (someday I’ll tell you about how I still own my first-ever laptop, my first pair of Doc Martens, and a red cup from the first college party I ever went to). But the second and third situation I still regret. By skipping town during two necessary but painful moments, I cheated myself, my roommate, and my ex out of much-needed closure. My roommate and I eventually talked about it and I apologized. But when it came to ending things with the woman I’d been with for four years, someone I’d been engaged to and planned for a future with, I was neither literally nor figuratively present for her transition out of the home we shared. I thought it would save me from dealing with the pain of the moment, but in reality, it only made it worse; she was gone, but the pain was waiting for me when I came back.

I never want to make that mistake again. I want to feel my feelings deeply – the good and the bad. I don’t want to be “out of town” when reality is happening, even painful reality, and I’ve taken steps to correct this.

Two years ago, my Uncle David, the oldest member of my family, after a long fight with organ failure was near death. I had the chance to call him and say goodbye. That afternoon, I went into an empty classroom, set up Skype, and called my Uncle David. We talked for about twenty minutes. I rehashed a funny story; I was fourteen years old, helping him sell toys at a rural flea market. Spur-of-the-moment, I bought a black rabbit. I realized after the fact that this was a terrible idea and pretended to be allergic. I begged my uncle to help me return the rabbit for a refund. Now, nearly thirty years later, he remembered, and that formed the core of our last conversation. After the funny story was over, it came time to say goodbye, and we did so in the only words that can do such I thing: he said to have a great life. I told him I loved him, he told me he loved me, and we said goodbye and I hung up the phone.

I videotaped the whole call. I wanted to have it. I like to have small pieces of gone-things. I have a 10 inch piece of fabric from a childhood blanket. I have a visitor’s pass from the nature preserve where I got my first kiss. I have 30 seconds of video, just me crying, following my call with Uncle David. I couldn’t be with him in the hospital in Milwaukee, but I was with him on the phone. My sadness, after the call, was part of an experience I needed. I needed it in order to be ready for another phone call, 24 hours later, when I learned that he was dead. (I’ve written about this experience, by the way, in my post: “Grieving in the Age of the Selfie”).

Being present in moments of grief, leaning into the sadness is, I think, a very Jewish idea. In Hebrew, a funeral is called a “Halvayah,” meaning “to accompany.” The family accompanies the closed casket to the grave and participates in burying the loved one, each family member shoveling dirt, an act of kindness to the body, to help it on its way, to rejoin the earth. In Jerusalem, no casket is used: a body is simply wrapped in a shroud and lowered into the earth.

There is no escaping the reality of what is happening. 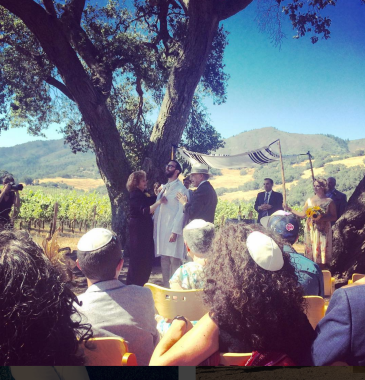 My parents, helping me into my “kittel,” a kind of ceremonial robe for saying goodbye to your single self. You wear the same kittel on Yom Kippur to say goodbye to your old, flawed self, to make room for renewed commitments. And, indeed, you wear it after you die.

Not every goodbye is so sad. Last summer,  on the happiest day of my life, under the chuppah, I laughed and I cried. I laughed because I couldn’t believe the waterfall of joy pouring into my bride-to-be and me from all around, and cried because of the enormity. I was saying goodbye to “single-me” whom I have known all my life. I really loved single-me, and yet, single-me was ready to go… to go to the place all beloved things go when they go forever. Somewhere far overhead. Somewhere deep inside.

Whether saying goodbye to a scooter, a family member, a dog, or your former self, I think doing it “all in” is important: for the past, for the present and the future. For the past, because it gives honor to history. For the present because that’s the only time when we can make choices. And for the future, because saying goodbye properly allows us to pave a path towards a life where we are okay. Where we can remember fondly. Where we can fall in love again.

Where we can move on.

All this is on my mind because last week, I said goodbye to a machine, a machine I loved. And if a machine could love, I feel like this one did. It was glad that I didn’t send it to scooter heaven without a proper goodbye. And that I took it for a final ride on its last day, cracks and duct-tape and all, around and around and around the school’s parking lot in the rain.

It would be glad that, like I did with Maggie, I laid my own bare hands upon it in our final moments together. I wheeled it up the ramp myself, I held to keep it from falling it as the man winched it down. I didn’t turn my back on it.

I watched it go. 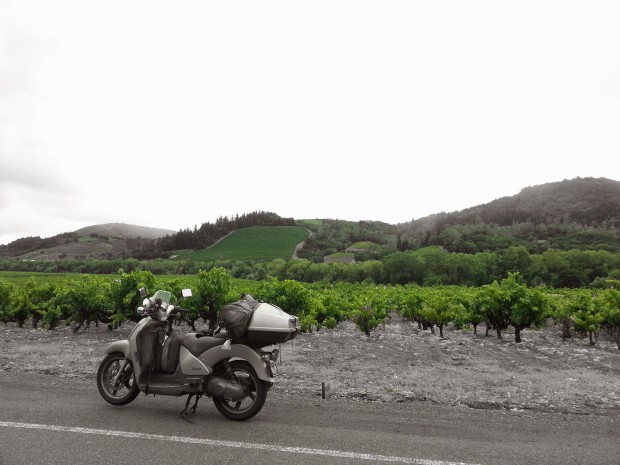