Meet Chris – in his own words. The cartoons are mine. 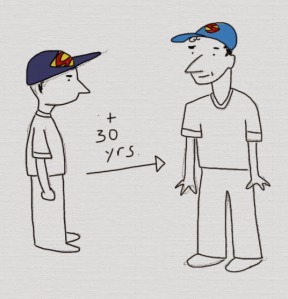 I have a Superman cap I’ve been wearing off and on since I was a grade-schooler, and golly, it’s fantastic.

WHAT’S THE STORY BEHIND YOUR INTEREST IN “STYLING UP?”

Before the Style-Up I was a flat glass of milk. After the Style-Up, I’m an effervescent bottle of Italian Soda with a twist of lime. 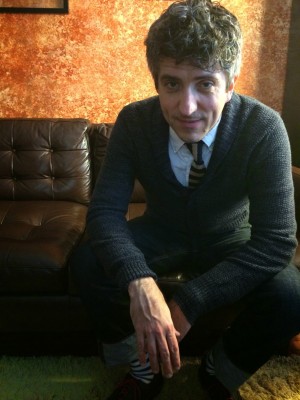 In a recent interview with J. Weekly, I was asked what a man on a budget could do to Style-Up, and my first piece of advice was to make sure your shirts fit properly – notably, shirts’ shoulder seams must hit right at the shoulder.

Shoulder seams should hit right at — well, the shoulders.

Chris and I started at Banana Republic and picked out 3 staple shirts: chambray, and black gingham.

All three were snugger in the torso than Chris was accustomed to, but a saleswoman watching us remarked, “Looking good! Great fit! I hate it when guys wear their shirts too baggy!”

Going into the Style-Up, Chris (who had read my polemic on the power of the knit tie) warned me: I will not be buying any knit ties.

I reassured him that there would be no knit-tie pushing.

Until he found a sweater he liked and asked what I would advise wearing it with.

Let’s just say that Chris is the proud owner of a fly knit tie. 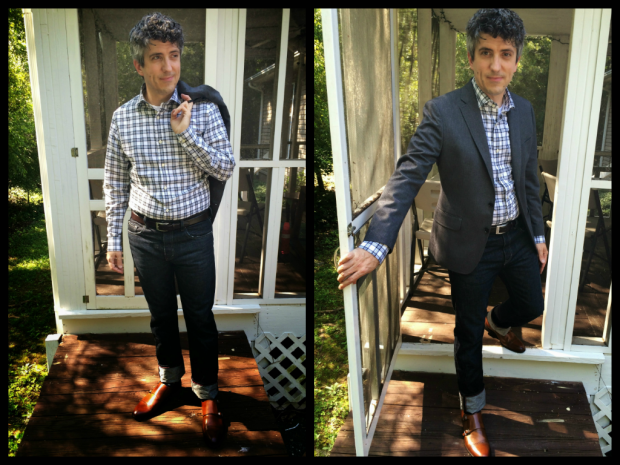 Through the Denim, Darkly.

Though Chris emerged from the Style-Up with enough outfit options to suit up during his entire upcoming international adventures, he only needed one pair of pants, and, perhaps surprisingly, it’s something he already had.

Rather, the distinguishing feature is that they must be dark denim. Dark denim is not the same as faded bluejeans. They look sharp. They look “grown up.” They never look douchey, and you can wear them with a t-shirt if you’re ready to rock a Paul Newman look, or with a nice shirt and thin tie, if you’re ready to bag a new client with the best barrel-aged Manhattan ever.

We picked out a pair of slim-fitting, straight leg jeans in an indigo-blue color, and we cuffed them at the bottom so there was no drape.

Chris, time to get comfy with the fact that your shoes are gonna be ogled.

Chris likes to wear a pair of hiking boots when he’s taking his kids to the park, but his best leather shoes are sweet oxfords from To Boot New York. They are classy but conservative.

To bring Chris a bit forward into flair-city, we fit him with two pairs of shoes which I was jealous of.

First, he surprised me by pulling from the shelf (I’d like to think it has to do with my comforting presence) a pair of Monk Strap Dress Shoes.

Monk Straps are the flashy cousin to the Oxford. They’ve been making the feet of men fly since European friars rocked them for their foot-protecting, laceless simplicity. Now, paired with dark denim and a stylish shirt-n-tie, they’re a little bit classy and in fact – a little bit dandy. 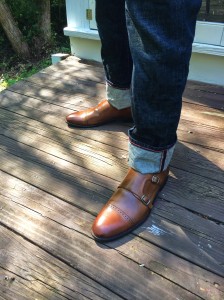 Monk Straps: Classy with a touch of dandy. And a touch of the best dressed Franciscan Friar in the abbey.

I figured that was it for fine footwear, until Chris laid his eyes on a pair of shoes close to my heart  – blue Allen Edmonds neumoks. I suggested, back in a post on the top five stylish to do with a Tax Refund, that anyone who lays eyes on these shoes might find their eyes welling up in joy – whether for their style or for the fact that they’re union made in Wisconsin.

Their red laces played off the “trust me” socks I’d put in the shopping basket earlier. and though they’re bold in their color, they go with everything.

Blaze it, Sweat It

Chris wouldn’t have described himself as much of a “blazer and tie guy” … like about every other fellow I’ve done a Style-Up with. And like many of us, the second he found a blazer he liked, it was like he’d just discovered wood-fired margherita pizza with fresh mozzarella and fresh basil.

Like a pizza from Del Toro, great style is all familiar ingredients – just better. Fresher. And more lovingly made. And the meal, as a result, is fan-fricken-tastic. It’s beyond being simply full at the end of a meal. It’s being moved and delighted and kind of impressed.

We left Banana Republic with a fine pair: an unstructured (no padding, no lining) navy blue blazer and a classy grey blazer. Both items can be paired with shirt and tie for a casual, styley, professional look, but the blue one (with it’s working buttons) can be worn with a white t-shirt, sleeves rolled up, for a rock-star on a nice date look.

Live in the bay area? A style-up is painless. Maybe even fun. And it might help you land a date / job / both at the same time. Drop me a line at stylefordorks at gmail dot com.

Outside of the Bay Area? Through the miracle of the interwebs, we can arrange an on-line consultation. You’ll end up with a handful of great items, some new looks, and a spring in your step. Drop me a line at stylefordorks at gmail dot com.