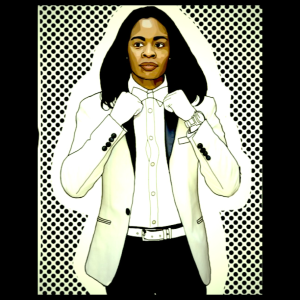 “She’s A Gent” – a fantastic style blogger, describes herself as “sporty, classy, tailored, and clean.” She also uses the Oxford Comma (we approve) and is sweet to correspond with!

What do you call someone who’s dapper, who wears a tie and blazer, and who rocks an amazing pair of wingtips?

I suppose the title of the post gave that one away. (That’s also how I tell jokes. I say, “Speaking of mixed dancing…” Everyone who’s heard that one a million times rolls their eyes, and I don’t have to tell the joke.)

But all kidding aside, I’ve had a few readers ask why I haven’t done a post on women. And while I’ve proven myself adept at picking out sweaters, shoes, and the occasional dress for my girlfriend, I’ve never thought of myself as a maven of women’s style.

Until…a dapper colleague and I got to talking. We share similar taste, an admiration of men’s style, but she was interested in seeing what a Style-Up could bring her game.

Here’s Julie in her own words. The cartoons are mine.

I have a good eye, I know what I like… I liked the tailored look, but I wanted to take more risks.  I’ve spent my life being attracted to the tailored, crisp lines of men’s clothing. But only in the last ten years have I realized that if the clothes don’t hang on my shoulders tightly at the right spots, the clothes are wearing me.

WHAT’S ARE A FEW STYLE-CHALLENGES YOU DEAL WITH?

WHAT DOES MENSWEAR TEACH US ABOUT STYLE IN GENERAL? 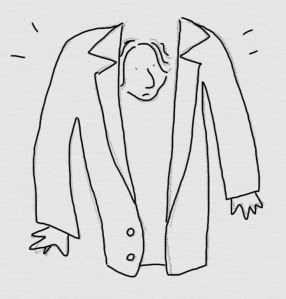 Only in the last ten years have I realized that if the clothes don’t hang on my shoulders tightly at the right spots, the clothes are wearing me.

For me, the intersection of men’s and women’s fashion is fit vs. form. Men’s clothing brings straight lines and economy – important to any aesthetic. 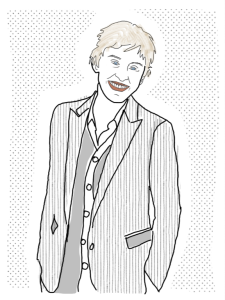 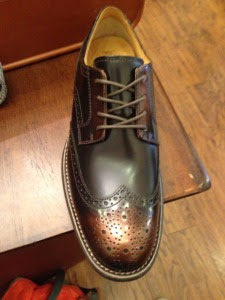 Julie didn’t need to be convinced that shoes are the place to start. We went to a great menswear spot in the Castro District of San Francisco called Citizen, which, I’ll admit, taught me a great deal about how to assemble a surprising and yet satisfying outfit. Citizen describes their aesthetic this way:

Specializing in clean, European-inspired lines, Citizen is for the sophisticated man who knows how to dress sharply without sacrificing personal flare.

The word itself describes fire, the beginning of a process: maybe something a little dangerous. Flare is about light, brightness, catching the eye — but too much could burn or destroy the crisp lines.

With that in mind, Julie and I looked for shoes which would be at once classic and also edgy. Something she would recognize and admire if it was at J.Crew or Banana Republic, and yet, something new, never seen before. Somethibg which no one would have seen before. 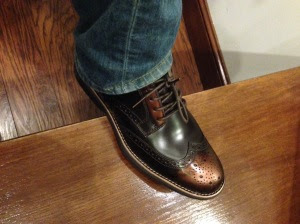 These shoes are by Sperry Top-Sider. What could be less exciting than the company which makes the boat shoes that everyone already owns?

A color and finish never, ever seen before.

This approach, mind you, is not new.

Sperry Top-Sider nailed it with this line, and it got Julie and I off to a great start. 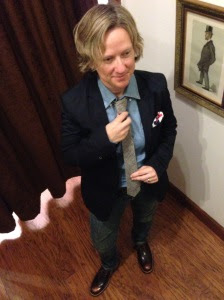 Julie typically rocks an air-tie, which is a sharp, styley, casual way of wearing a shirt, buttoned up to the top – without a tie. It’s kind of a hybrid. A little edgier, a little more class than leaving the top button open.

But what would happen if we added a tie? Julie didn’t want to dress like a banker – she wanted to add a little unexpected edge to her outfit. We hunted for a tie that would be thinner (thinner ties are more casual, more styley, and work better on a woman’s body) and we found one in a material that had some glint (for flare +1) and a loose, textured weave to play against the blue in her shirt.

This tie is made by DIBI. They’re unique and yet classy, surprisingly affordable, and they donate from profits to purchase school supplies for schoolkids, worldwide. 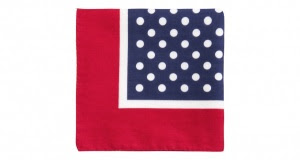 Besides the tie, Julie and I wanted to pair her classy, Ben Sherman blazer with a little pocket-candy: a handkerchief. Usually, I go for the tight, neat folded cotton or linen look, but I wanted to add a dose of disorder to the abundant clean-lines of her outfit.

This handkerchief, with it’s Americana red, white, and blue, contrasts the blazer’s navy-blue formality with maritime, vintage playfulness, sort of like the rockabilly women’s dresses of the 50s and 60s. Call it an homage. Or a femage, if you will. 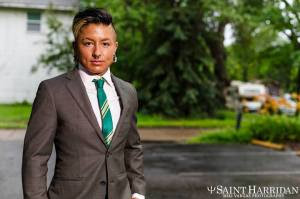 St. Harridans is designed to fit women and transmen and is damn styley.

If you’re a woman who wants to wear “masculine” clothes, you might need to be persistent and get lucky and find something that happens to be cut just right. And that can be frustrating. As Julie pointed out in her Style-Story above, a men’s size small might “fit,” but it won’t fall in the right places. And putting on garment after garment which looks lousy in a dressing room is – let’s face it – not fun.

Another option, she can buy something that’s really close to her size and spend a bit of money at a great tailor. And truth is, once anyone starts to step up his or her style game, he or she gets used to the idea that after the trip to the store, the next trip is to the tailor. So join the club, and enjoy the benefits that a pro with a needle and thread can provide. 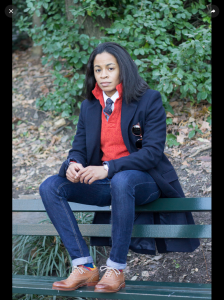 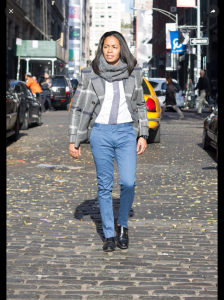 Some designers and labels make clothing exclusively for dapper women and transmen. I am particularly inspired by St. Harridan, which adheres to ethical manufacturing practices (in Massachusetts and North Carolina) and which designs those “clean, tailored lines” that Julie clambers for.

My advice, though – poke around online. Google a few choice terms and find a blogger or stylewriter who matches your tastes (I recommend She’s A Gent, one of my favorite women style writers). Read what they write, and maybe drop them a line; many of us are happy to share our secrets. 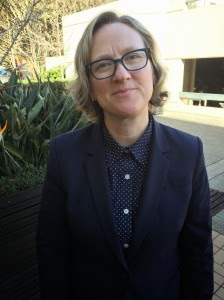 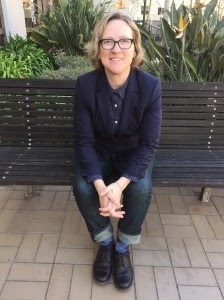