Since this whole 30 days of writing thing began in Austin, (click here to reverse time, 30 days), it makes sense that we should end up back in Austin. (Tomorrow’s post will be sort of meta, so this is my last chance to come full circle.)

What I did on my winter vacation.

Being a bit of a dork, before traveling to a new place, I like to gather suggestions – where to go, where to eat. This is not to say that I don’t love wandering. Believe me, I’ve found myself in plenty of bizarre travelling scenarios, all because of my penchant for wandering into the less-trod corners of cities. But I like to have some pins in the Googlemap, so to speak, before I get off the plane. So, since certain men’s style magazine featured a “must visit” menswear store, on my second day in Austin, I headed over to inspect their wares / wears.

Yup. It was very good. All the same brands I’ve seen at all the other “don’t miss them” menswear locations in Chicago, Madison, Los Angeles, San Francisco. The same mix of lumbersexual, high quality, rugged work-shirts and insanely expensive denim. Some blazers and ties. Also, gifts: leather holsters for coffee-jars. Cremes that smell like an old apothecary. Decorated with salvaged wood, exposed beams, brick. You know the look.

Then, a few days later, driving in a cab to dinner, I did a double take.

Dandy’s is one of a kind, but their vision is one that I immediately connected to: vintage style, modern cut menswear. And when I say vintage, I don’t mean 70’s or 60’s or even 50s’s. I mean the period of the late 1800s through 1930s.

Now, I’m not talking steam-punk (you know, monocles and propellered top-hats). That stuff is amusing at best, and suitable only for Burning Man or maybe the Edwardian Ball. Rather, I’m talking about finely crafted clothing – not costumery.

After receiving excellent customer service from their staff, I spoke with Wendy, the

co-owner, and her husband Chris, who rocks the vintage look as naturally as any Wild West saloon barkeep. The store started from a deep desire to create this vintage, gentleman’s look, and it began in the iconic way that every good company begins – out of a garage, a streetcorner trunk, or, in Dandy’s case, an elaborate sidewalk tent, complete with steamer trunks and velvet curtains.

“We wanted to recreate a look and a feel, not just put out stuff for people to buy.”

A few years later, now, Dandy’s is doing something that no other menswear place

is: designing clothing according to this century old aesthetic, and choosing cuts and patterns not because they’re trendy, but because they’re handsome. For example, during this time period,

many jackets featured four buttons – this created a broad, gentlemanly silhouette. Now, this doesn’t exist – outside of Dandy’s.

Also: cloth covered buttons, double-breasted waistcoats, hats far beyond the fedora, classic boots (some inspired by the otherwise extinct spats of yesteryear, and ties in rich colors and patterns than might have graced the neck of a gentleman from 1915.

Dandy’s designs are in-house, many products are made within a few hundred miles of the store, and the aesthetic is inspiring. 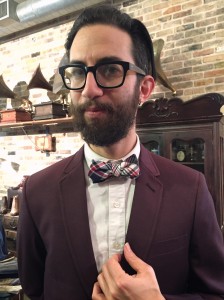 On your next trip to LA, certainly, stop by American Rag and General Quarters, in San Francisco, visit Union Made, in Madison, visit Forequarter, and in Austin, sure, visit Stag. But miss any of these places, and it’s not a problem. You’ll find the same items in a dozen other places.

But whatever you do, do not miss Dandy’s…even if you need to plan a trip to Austin, just to see it. 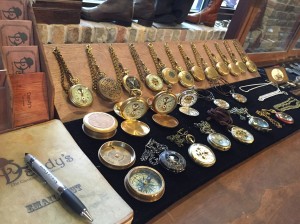