I have another secret writing identity. I’m not only a Style BLogger. I’m also the author of an ed-tech blog, magnetiCClassroom.

Well, now you know. Anyhow, I wanted to write tonight about “fail-forward” and “design-thinking.” Design thinking is a process which some groups go through in understanding a problem to the point of empathy, creatively designing solutions, and rationally studying the pros and cons of each.

If design-thinking had a Patronus, it would be a glowing pad of Sticky-Notes. Design-thinkers throw ideas on the wall and see what sticks. So to speak.

And they speak about failing as I speak about the time I went to science camp in middle-school. It can be awful, but if you embrace it and get it out of the way, (fail forward), you can learn a great deal from it.

I mention this because as I left Milwaukee to come home, my father pulled, from out of a stack of photos, this gem.

The hat is an Uncle Bill hand-me-down, the shirt is big and billowy in the sleeves, and you could fit two fingers-breadth between my neck and the collar.

What else? Now that I’m on a roll: the tie is shiny silk, the vest is too big, and the 90s goatee would be more acceptable if it wasn’t already 2002. I won’t say anything disparaging about my father’s outfit, but I do think the ortho-boot adds a little something to the look.

To finish, the pants are too baggy, and I’m wearing huge, round-toed Dr. Marten’s slip-on boots.

I sent a picture of this to a friend, and I said, “Can you believe how bad this is?”

And instead of laughing with me, he said: “I see that as baby-steps towards how you dress now.”

Indeed, I remember so many times putting on an outfit and wishing it looked good, but knowing it didn’t. I kept trying. I failed and sometimes I succeeded.

In the picture, yes, I was failing. My dad, maybe, too. But we were failing forward. 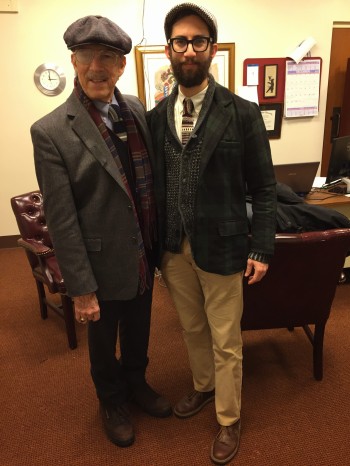 10 Years Later: Older and Wiser. And yet, maybe more youthfully-styley?

There is no growth without failure, and there is no failure without trying.

And there is no way to be styley without experimenting. So.

Get ready to fail. And have fun with it.

Got this magic number from my friend @ianharvie - call it and a nice recording will tell you what’s going to happen: namely, you’ll be connected to Minnesota and Minneapolis officials one after the next. Do what I did: “I’m so and so...I’m not from —- and not from your area but people all across the country like me feel really strongly about this...” I left 5 messages in 10 minutes and felt less anxious and more angry with each one. You can do it, too.
Kids need to feel seen, heard, and felt: thank you @ReadBrightly and #Bookopolis for including #TurtleBoyBook on this excellent list of books about friendship, understanding, and connection.