When I was a kid, I’d read the funny papers, eagerly, every Sunday morning. If it was Christmas or Thanksgiving or the 4th of July, most of the comics would know that. Even though, year by year, the round-headed kids never grew up, the orange cat never got old and arthritic, and the boy with the tiger never hit the awkward stage, on holidays, time meant something. For a few times a year, comic-wonderland and our earth-calendar aligned. Turkeys, Santa, Fireworks, even ballots — they all appeared for one day.

And then, there’d be some hanger-on, old-ass comic that would persist in its obliviousness to what day it was.

Today was a pretty damn important day for this country. For me, MLK day is about hope and change and progress. But it’s also about not getting self-congratulatory. More work remains to be done than has been done, and for the time being, America doesn’t have a leader like Dr. Martin Luther King, Jr. to point everyone in the right direction. We need to be putting 365 days-a-year’s worth of attention and effort into affecting change, but we’re obligated on this day to look not only forward, but also backwards in history.

I feel the need to drop a pin at the point of the connection of style and the legacy of the Civil Rights Movement — because this is a men’s style blog and it’s MLK day and I will not publish the style blog equivalent of four panels of zany army-guys, frolicking on an army base.

Today, the style blogs should stand, remove their hats, and pay their respects. 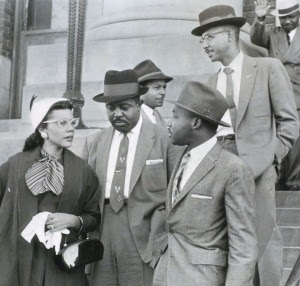 Which brings me to the subject: hats. As featured in pictures of MLK.

I recall seeing pictures of MLK in my high school textbooks, and while he has a face both kind and fierce, I recall being struck by the simple, dapper elegance of his hats. I was a teenager, easily struck by such things.

Later, as a high school teacher, bringing students to Montgomery, Alabama’s Bus Boycott Museum, MLK’s hats were the last thing on my mind. There was a message I needed to communicate to my students. It was urgent.

But an online image-search brought that high-school memory back to me.

I offer this as a small tribute to this immense figure. All year, let us do the work of bringing his dream into reality.

But for one tiny moment, this style-writer wants to give a salute to what Dr. King wore on his crown.